For Addie B. Merritt 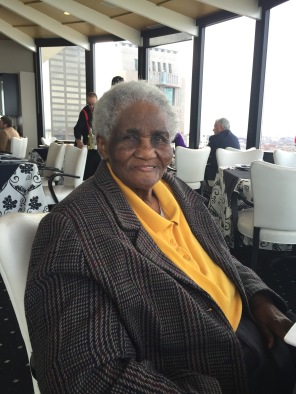 When I used to tell people that I lived with my mother-in-law, on purpose, that my wife and I intentionally bought this house because it would accommodate my mother-in-law, people acted like I was crazy. Or they would claim that I was some kind of generous saint for permitting my mother-in-law to live in my home. Mothers-in-law get a bad rap; there’s a lot of cultural baggage attached to this role. How many of you have heard a mother-in-law joke? And the term itself–mother-in-law: it sounds so clinical, so impersonal.

What the critics and naysayers didn’t know or understand was that living with my mother-in-law was not a burden, and that I wasn’t some kind of saint for wanting to do it. And while I do confess that it took me awhile to warm up to the idea when Constance initially suggested it years ago, I learned to embrace this new reconfiguration of our family unit. The truth is that I got along much better with my mother-in-law better than I did my own mother.

When I first met Addie on a Thanksgiving visit to Pine Bluff, Arkansas, in 2008, I couldn’t have imagined the relationship we would have someday. I wasn’t really sure if she was going to like me or not at first. We went to dinner at Bonanza the night I arrived in Pine Bluff. Addie wanted the banana pudding from the buffet so I rushed to dish her up a serving, ever eager to please and be likable. She found my offering to be lacking in Nilla Wafers, however, and sent her granddaughter Holiday to get her a proper serving. I really thought I had made sure to get sufficient cookies in the helping I got for her, but apparently not, and I was a little crushed to have had my efforts rejected. However, by the time I left Pine Bluff, I felt like she must have liked me pretty well, because she gave me $20 for gas money for the road trip home and advised me not to pick up any hitchhikers.

One another Thanksgiving visit–I don’t remember when–she said that I was a good cook for a white girl, or something to that effect, which I rightly interpreted as high praise. And a few years ago, when Constance and I were contemplating whether to attend the Miller family reunion with Addie, I expressed some concerns. Having experienced rejection before due to my relationship with Constance, I was worried that the Millers might not accept me as a valid family member. Addie’s response: “They’ve seen white people before.” As in: it didn’t occur to her that the Millers wouldn’t accept me, her daughter’s wife. She assumed that my concern was about race.

I may not h

ave looked like I belonged to Constance and Addie’s family, but the little family unit we formed when we all started living together is one of the most special things that’s ever happened to me in my life. Our home is on Grinstead Drive, and when we all moved in in February of 2015, I liked to think of our little trio as the Grinstead Girls. The Grinstead Girls enjoyed doing lots of things together–watching General Hospital and Judge Judy, trips to McDonald’s after doctor’s visits, trips to Walmart so Addie could procure vast amounts of cough drops and Werther’s Originals, ordering pizza on Friday nights, playing spades, or visiting my family in northern Kentucky an hour and a half away from Louisville. She delighted in becoming Grandma to our two cats, and our younger cat, Gertie, became her best and special friend. Gertie now had three laps to sit in, but she always chose Grandma’s first. When Addie moved in, she said, “I’ll make you a deal: I’ll wash the dishes and mop the floor, but I’m done cooking.” And so it was. We enjoyed lots of good meals together, her favorite being the baked mac and cheese Constance makes with two different kinds of cheese and bacon bits. Addie also liked my chili. As far was she was concerned, we didn’t make those meals often enough.

I work as a college librarian and I have the freedom and flexibility that comes from being a tenured faculty member. Addie always liked to say, “Maria has a good job.”  And when I took leave from that good job in order to be home to help care for Addie, she said, “That’s the best news ever.” I thought it was the best news, too, because nothing is more important than family. I think that’s one of the greatest gifts Addie had to offer, one of the greatest gifts I received through knowing her and living with her and being a part of her family. And getting to live with her in the last year and a half of her life, and getting to care for her in her final days, were gifts, too. When it was clear that Addie was declining, that she was on her way out of this world, I was afraid. I was afraid that I wasn’t brave enough to handle the challenges of caring for a person who was dying, of witnessing those final days and final moments. But I found courage in the act of just doing it, in the act of caregiving. I found courage in the wise words of George MacDonald, a 19th century Scottish author and minister: “What God may hereafter require of you, you must not give yourself the least trouble about. Everything He gives you to do, you must do as well as ever you can, and that is the best possible preparation for what He may want you to do next. If people would but do what they have to do, they would always find themselves ready for what came next.” 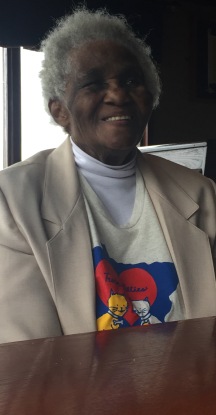 I can’t even imagine what’s happening next, or how to be ready for what is coming next. Constance and I are missing one member of the Grinstead Girls, and our home feels lonely and empty. I know, though, that all we have to do is live in the now, to rejoice in the life Addie lived and in the gifts we received from knowing and loving her, and we will be prepared for whatever comes next. Addie was more than a mother-in-law to me. She was my mother-in-love.